A Force of One G 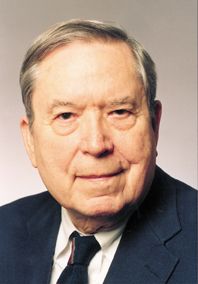 THE NEXT TIME you are in Southern California, stirring your gin and tonic laden with beautiful cubes of H2O, you might want to thank George W. Housner (MS '34, PhD '41), Carl F Braun Professor of Engineering, Emeritus. Some of the water in those ice cubes probably comes from the Feather River, which exits the Sierras north of Sacramento. The water runs into the Oroville Dam, eventually makes its way south down the American River to the California Aqueduct, and finally to the spigots of Los Angeles, passing through about 20 dams and a handful of pumping stations on the way—as well as crossing the San Andreas fault no fewer than three times.

Back in the late '50s, when Housner first saw the plans for this complex system of dams, pumping stations, and waterways, he wrote a letter to Harry O. Banks, director of water resources for the state, and pointed out that they were "facing big earthquake problems." Banks was not impressed, but thankfully, Alfred Golze (chief engineer and later deputy director in direct charge of design and construction) was, and he accepted and implemented the engineering recommendations of Housner and his colleagues. This was the first time that modern earthquake engineering techniques were applied to dams and pumping stations--it set a precedent for civil engineering projects throughout the world, and is still regarded as a model of earthquake safety today.

Housner, the founder of the modern science of earthquake engineering, was honored on his 90th birthday last December by friends and colleagues with a wonderful fête at Caltech. His friends and longtime colleagues (including professors John Hall, Ronald Scott, Paul Jennings, Thomas Heaton, Clarence Allen, and Wilfred Iwan), spoke in turn and gave a glimpse of the multifaceted Housner—his interest in things literary; his great contributions to the field of earthquake engineering and the resulting practical changes this work elicited, particularly the modification of building codes in Los Angeles and elsewhere; his character and collegiality—in short, an overview of how Housner has wrought great changes in the world around him, as well as brought much more than dynamic stability to his society of engineers, scientists, and friends.