Powering Progress in the 21st Century

Fuel cells are attractive alternatives to combustion engines for electrical-power generation because of their very high efficiencies and low pollution levels. Like a combustion engine, a fuel cell uses some sort of chemical fuel as its energy source, but like a battery, the chemical energy is directly converted to electrical energy, without a messy and inefficient combustion step. The components in a fuel cell that make this direct electrochemical conversion possible are an ion-conducting electrolyte, a cathode, and an anode, as shown schematically in Figure 1.

In the simplest example, a fuel such as hydrogen is brought into the anode compartment and oxygen is brought into the cathode compartment. There is an overall chemical driving force for the oxygen and the hydrogen to react to produce water. In the fuel cell, however, this simple chemical reaction is prevented by the electrolyte that separates the fuel (H2) from the oxidant (O2). The electrolyte serves as a barrier to gas diffusion, but it will let ions, in this example O= (oxide ions), migrate across it. In order for the reaction between hydrogen and oxygen to occur, the oxygen atoms must somehow pick up electrons at the cathode and give off electrons at the anode. The reactions are then:

Now, in order for the "half-cell" reactions at the anode and cathode to be possible, there must be some external path by which electrons move, and it is precisely this electron motion that provides usable electricity from the fuel cell. Several different types of fuel cells have been developed over the past few decades, and they are differentiated essentially by the type of electrolyte they employ (see Table 1), which in turn determines the temperature at which the fuel cell operates. For reasons of efficiency, higher temperature operation is preferred, but for portable power applications, lower temperature operation is preferred. High temperatures generally imply that reactions occur quickly and a broad range of hydrocarbon fuels can be directly utilized in the fuel cell, but start-up times can be very long, and there is a limited number of (usually expensive) materials available for fabricating the fuel cell. Thus, the challenge facing Solid Oxide Fuel Cells (SOFCs) is to lower the operating temperature to ~500°C, primarily for reasons of cost. Even lower temperatures are advantageous for applications in which the power demands are not continuous because start-up times are short, but under these conditions chemical reactions are slow and fuel choices are essentially limited to hydrogen and possibly methanol. If the hydrogen is obtained from a hydrocarbon fuel (this can be done by reacting methanol with water to yield hydrogen and carbon dioxide), there is inevitably some residual carbon monoxide in the hydrogen supply. Carbon monoxide, in turn, is extremely detrimental to the catalysts in the fuel-cell anode. It easily adheres to the surfaces of the catalyst particles and renders them inactive, particularly at low temperatures. Thus, there is a large incentive to raise the operating temperature of Proton Exchange Membrane (PEM) fuel cells to ~140°C, at which temperature the catalyst is tolerant to several 100 parts per million of CO.

While there are many technical hurdles still to overcome before fuel cells can become a widespread commercial reality, our work has focused on those obstacles which arise from the limitations of the electrolyte. In considering electrolytes for solid-oxide fuel cells, the high-temperature requirement arises because the oxide ion is big and bulky and requires significant thermal energy to be sufficiently mobile. What we have done is develop proton-conducting oxides as an alternative. About twenty years ago a group in Japan discovered that some metal oxide compounds (ceramics) can incorporate significant concentrations of mobile protons. We have used this idea to explore new compounds and have recently discovered materials with proton conductivities that are 100 times better (at about 400°C) than what was known just two years ago.

The mechanism of proton incorporation and transport in these oxides (most of which have the perovskite crystal structure) is as follows. The normal stoichiometry of the base perovskite is generically AMO3, where A is a divalent cation and M is a tetravalent cation. In order to generate vacancies on the oxygen sites, a portion of the M4+ is replaced with a trivalent cation. The material is then exposed to gaseous H2O and the formerly vacant oxygen sites become filled with hydroxyl (OH) groups, while the second proton of the incorporated water molecule attaches to some other oxygen in the structure. As a consequence, two hydroxyl groups are created for each water molecule dissolved into the structure. The radius of an oxygen ion in a ceramic material is typically taken to be 1.4 Å. The bond distance between oxygen and a proton in a hydroxyl group is only ~1 Å. It is quite fascinating, then, to recognize that the proton resides within the electron cloud of the oxygen ion. The protons attain their high mobility from the ease with which they jump from one oxygen ion to the next. Our work in discovering new proton-conducting oxides may make it possible to operate solid-oxide fuel cells at temperatures of 400-600°C, a temperature range that retains the fuel flexibility of high-temperature operation but eliminates the material constraints of operation at 1,000°C.

Our most exciting breakthrough has been in the area of alternative electrolytes for lower temperature operation. State-of-the-art electrolytes for Proton Exchange Membrane fuel cells use a perfluorinated and sulfonated polymer. In order for the polymer to be conductive to protons, it must be fully hydrated. The electrolyte can almost be considered a composite of the polymer and water, Figure 2. These electrolytes offer the advantage of very high conductivity and are easier to use than corrosive liquid electrolytes such as phosphoric acid and aqueous potassium hydroxide, which, until recently, were the only known electrolytes for low-temperature operation. They also, however, possess several severe drawbacks. Because the ion transport relies on the presence of water, the material can not be utilized above about 90°C. Worse, the dehydration that occurs under accidental thermal excursions cannot be recovered. Another disadvantage is the very high permeability of the membrane to methanol. This permeability implies that if methanol is used as the fuel in a PEM fuel cell, a large portion of the fuel will diffuse across the membrane and react directly with the oxygen, without providing any electrical output. A third disadvantage arises from the fact that the mobile ions are not, in fact, protons, as the name implies, but rather hydronium ions, H3O+, H5O2+, etc. What this means is that protons essentially hitch a ride on diffusing water molecules to get across the membrane from the anode to the cathode. But as this happens, the membrane becomes dehydrated at the anode and flooded at the cathode, and careful water management is required for stable fuel-cell operation. These difficulties--required low-temperature operation, permeability to methanol, and water recirculation issues--are inherent to hydrated polymer electrolytes. Accordingly, our approach has been to develop radically different proton conductors based on inorganic (non-polymeric) solids, specifically, solid acids. 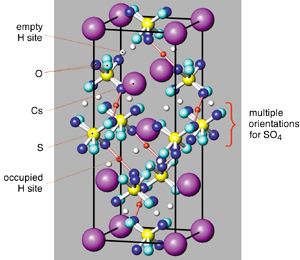 Solid acids are compounds such as CsHSO4 whose chemistry and properties are intermediate between those of a normal acid (e.g. H2SO4) and a normal salt (e.g. Cs2SO4). They typically consist of oxyanions, for example, SO4 or SeO4, that are linked together via O-H...O hydrogen bonds. Several are known to undergo a structural phase transition at slightly elevated temperatures (50-150°C), at which the proton conductivity jumps by several orders of magnitude. In the high-temperature disordered structure, Figure 3, the XO4 anion groups undergo rapid reorientation, on a time scale of about 10-11 seconds. The proton typically remains attached to one of the oxygen atoms of the XO4 group until every so often a neighboring XO4 group is in the proper orientation for proton transfer to occur, Figure 4.

A key feature of the proton transport process is that, unlike polymeric systems, the protons themselves are truly the mobile species, and all the difficulties associated with the need to hydrate the electrolyte are eliminated. Like proton-conducting oxides, proton-conducting solid acids have been known for about 25 years, first reported independently by Russian and by Japanese groups. They had not been seriously considered for fuel cell (or really any other) application because they suffer from solubility in water. In addition to discovering several new high-conductivity solid acids, we have demonstrated that these materials can, in fact, be used in fuel cells by employing a very simple trick: operation at above 100°C. At these temperatures, any H2O in the fuel cell is present in the form of harmless steam and does not damage the electrolyte. The challenge then becomes design of a fuel-cell system that ensures that liquid water does not contact the electrolyte during shut-down. Given the myriad advantages offered by anhydrous proton transport, this challenge is one that will surely be addressed. In the meantime, our exploratory synthesis effort continues, and water insoluble analogs are on the horizon.