How does an unknown, bright young Caltech scholar, during the pre-World War II era, become a leader in the exploding new world of supersonic aerodynamics, airfoil theory, and guided missiles? How does that same expert in fluid mechanics easily switch fields to become an international leader and corporate visionary during the rapid evolution of electronics and global satellite communications? And, after reflecting on a long and successful career, what message does he wish to send to his fellow alumni? For answers, I visited Caltech Distinguished Alumni awardee Allen E. Puckett at his Los Angeles home. 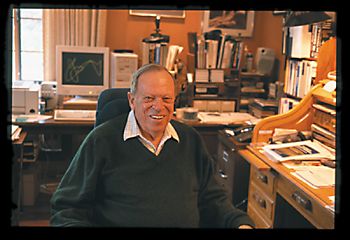 Use your imagination! And don't be afraid of taking risks.

For more than 60 years, Allen Puckett has been at the left, right, and center of a number of important research advances. As an industry captain with strong connections to government and academic research, he played various key roles in the development of supersonic flight, guided missiles, manned space flight, and communication satellites. After launching his career with his seminal thesis, Supersonic Wave Drag of Thin Airfoils, an important examination in radical aerodynamics, he went on to collect numerous awards, including the National Medal of Technology for the construction of the first synchronous satellite and the first commercial communications satellite.

Introduction to Caltech—And the War

Puckett's scientific, engineering, and technological adventures were set in motion during his years at the Guggenheim Aeronautical Laboratory at the California Institute of Technology (GALCIT). He had arrived at Caltech from Harvard in 1941, invited by Theodore von Kármán, who became his mentor and a source of inspiration:

"Theodore von Kármán gave me the strongest feelings of curiosity, the urge to explore and discover. He taught the value of the pleasure of exploring new ideas. He was a remarkable man--a wonderful human being. Just to know him was a privilege. He had a way of inspiring and stimulating us to keep probing, working to discover whatever it was we were looking for."

Puckett had barely set foot on campus when the United States entered World War II. The unique combination of the place as it was then, with the people Puckett met there, was at once tumultuous and thrilling--and always filled with discovery. Progress on his PhD was delayed by world events. However, the experience he gained as a consultant to the U.S. Government (1945-1949) added weight to the importance of finding ways to apply research to real-world challenges. Every day he and his fellow scholars learned something new and dedicated themselves to imagining new applications for their research.

"When I arrived here there were plans to build a 3-inch square test section supersonic wind tunnel. No one had ever built one in this country and that was my project."

Puckett had moved into a turbo-charged atmosphere, where his own imagination, intelligence and perseverance were both appreciated and strengthened. He first worked on an Army Ordnance Corps-funded project to test various types of artillery shells and projectiles for supersonic flight. Even though artillery projectiles exceeded the sound barrier, conventional wisdom of the day cautioned that airplanes would never fly faster than the speed of sound. But with the appearance of the German V1s and V2s, the U.S. Government's interest increased dramatically in wings, stabilizers, and bodies that might resemble missiles or aircraft at supersonic speeds.

Von Kármán, who had heard about a new German wing design that might possibly overcome the sound barrier, challenged Puckett to calculate the new concept: a "swept" leading edge that might delay the effects of shock waves over the wing, thus "fooling" the wing into "thinking" it was going slower than it actually was. The idea sounded possible to von Kármán. He trusted Puckett's ingenuity, mathematical expertise and, of course, his imagination, to produce a plausible calculation in support of the theory. In less than two years, Puckett produced the calculations that supported the concept. His paper got a lot of attention, and it became the basis for his PhD thesis.

While playing with various calculations, Puckett realized that the equations were "pretty messy," so to illustrate the basic principles involved, he chose a simple shape: the triangle. It was several years later and long after he left Caltech that the delta wing, as he coined it, would be incorporated into aircraft such as the Convair F-102 "Delta Dagger."

"I used a triangle because the geometry was simpler—the equations were easier to handle, and it made it easy to develop some principles or concepts about the effect of sweeping back the leading edge—the triangle could be long and skinny, or blunt—and then you had to choose where the maximum thickness would be—farther forward, or aft. Later in my paper and in my thesis I called it a 'delta wing.' This was the first serious attempt at a delta wing."

In the mid-1950s, Puckett's employer, Hughes Aircraft Company, was chosen to build the radar and fire control and guided missile systems for the Air Force's first delta wing fighter, the F-102. Puckett paused at this point to comment on a question I had posed in the beginning of my visit—what did he think about the importance of industry's involvement with science? His answer was an extension of his Caltech mentor's vision and the ethos of GALCIT:

"Von Kármán had a keen interest in the application of everything we were doing. He maintained strong connections with the aircraft industry in those days. In fact, that's how Caltech ended up building the famous 10-foot wind tunnel, which was used in the development of practically every commercial airplane up through the period of the war. He kept his students very much motivated by encouraging us to think about the applications of what we were doing. He wanted to know that the things we worked on were going to be useful. [Like von Kármán] I think industry plays a very important role in modern science, but it still has to depend on the academic research institutions to provide the fundamental science that goes into all aspects of what industry does—solid state physics, for example, or biomedicine. The industries are necessary to develop the applications that make this all pay off in the end—I think the universities more and more are recognizing that the collaboration between industry has been an essential part of the process to provide end results that are useful to you and me—to the people of the world."

From Supersonics to Electronics

In the days of pre-supersonic flight, GALCIT faculty and students certainly had the right stuff. Anything they published was new, a first. Yet in the years following the War, soon after he joined Hughes, another "revolution" occurred--this time in the electronics field, which promised far-reaching effects on data processing, data storage, and communications. These three areas of electronics application changed the way the world communicated with itself. Puckett again was in the right place at the right time, and he moved easily from the world of theoretical fluid mechanics to the promising new field of electronics.

"It was the mathematical underpinnings that allowed me to switch fields. That is a very interesting part of my career—I was just plain lucky to be around as the electronics field was beginning to explode. It matched very well with all the things I had been doing, so how could I not move into this new field? Everything we touched was new and exciting—the field was wide open! If you were reasonably bright and had some imagination—and worked a little bit—you could be the first and a leader in the field."

The introduction of satellite communication had an enormous impact on the world, and researchers at Hughes were among the first to set things in motion. They had proved it could be done by transmitting the 1964 Olympic games from Tokyo to this country via satellite, marking the first time anyone could see an event in real time from the other side of the globe. Yet Puckett and his colleagues did not stop there. Supporting the idea of man in space was next. They took on a government contract to broadcast the first television pictures of the surface of the Moon, a vital preparatory step in the Apollo program, which put the first man on the Moon in 1969.

"The Surveyor Project was one of my most memorable and valuable accomplishments. From a communications point of view, distance just disappeared."

From Electronics Back to Fluid Mechanics...Sort of

During the next two decades, as Hughes' Executive Vice President, then President, and finally Chairman and CEO, Puckett kept pace with emerging technologies. With Hughes, he found ways to create applications for the most sophisticated research results scientists and engineers in academia could offer. No doubt his influence gave rise to Hughes' mission of today: Breaking the Thought Barrier.

In 1987, he once again found himself in the right place at the right time—exploring, full-time, the practical applications of fluid mechanics in the form of sailing yachts. "Retirement" is the grand adventure that allows him, between marinas and large bodies of water, to spend more time with his wife, Marilyn, and his children and grandchildren.

Although his full-time commitment to industry shifted to Chairman Emeritus status in 1987, Puckett's interest in technological advancement has only accelerated since then. In this context, he is extending his business acumen and visionary thinking through philanthropic efforts for Caltech faculty and students. He and Marilyn, longtime members of the Caltech Associates, have established the Allen and Marilyn Puckett Professorship and most recently funded the Puckett Laboratory for Computational Fluid Dynamics.

It is interesting to note that the most dramatic real innovations in technology have been the result of private enterprise—the original and unconventional thinking of a small number of people in an environment that encourages innovative thinking. In the academic world, philanthropic contributions can be a vital factor in creating the right environment for innovation. It is not possible to predict the results—that is the essence of innovation—but we can guarantee that there is enormous opportunity for dramatic new ideas.