CIMMS: The Center for Integrative Multiscale Modeling and Simulation

Because the Real World is Multiscale, Dynamic, and Complex

Big whorls have little whorls which feed on their velocity, and litle whorls have lessor whorls and so on to viscosity. —Lewis Richardson English Mathmatician (1881-1953)

Investigators from many different disciplines have teamed up via the Center for Integrative Multiscale Modeling and Simulation (CIMMS) to model and analyze complex phenomena across multiple time and length scales. The challenge to CIMMS investigators is to help lay the foundation and further specific application areas of multiscale systems. Representative goals are to accurately model, simulate, and control multiscale systems in the presence of uncertainty or errors that might occur across scales. This work will be enabled by the interaction between research groups in multiscale modeling and those in multiscale geometric algorithms. Advances in these two areas are significant but isolated, and CIMMS members intend to systematically bridge the gaps between these two communities. CIMMS will become an intellectual hub for Caltech graduate students, postdocs, and faculty in research areas such as Control & Dynamical Systems, Mechanical Engineering, Computer Science, Electrical Engineering, Applied & Computational Mathematics, and Bioengineering. The Center will also function as a crossroads for industry researchers working on similar multiscale modeling and simulation problems. Researchers will collaborate through workshops, individual interactions, seminars, student internships, and industrial exchanges. A center with national visibility, CIMMS will allow Caltech to lead an intensive, focused effort to create an application-oriented and systematic multiscale approach to a wide range of scientific and engineering challenges.

The dynamics of molecular dissociation and satellite dynamics have similar behavior, but on vastly different scales. (Spacecraft figure of TPF, the terrestrial planet finder, courtesy of NASA.) 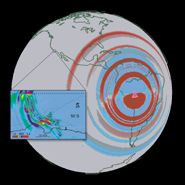 Seismic waves from macroscale (tectonic) to microscale (as in the Los Angeles basin) will be studied by CIMMS researchers. (Figrure courtesy of Caltech's Jeroen Tromp and UC Santa Barbara's Kim Olson.)

To represent this multi-task and multi-goal center, investigators selected a drawing by Leonardo da Vinci (above right). This image is an exquisite delineation of the turbulent flow of fluid as it involves vortices within vortices over an ever-decreasing scale. Da Vinci's study of the complexity of a "relatively" simple phenomena, water flowing and mixing, illuminates the essence of the levels of multiscale modeling and simulation.

Despite their ubiquity, multiscale systems are rather poorly understood from a fundamental perspective. CIMMS's mission includes two over-arching themes. The first is to develop a basic "core" infrastructure for the study of multiscale systems (see diagram this page). A prototypical challenge is to reliably compute larger, resolvable coarse scales while accurately modeling the net effect of smaller, or subgrid, scales in both materials and fluids. There have been some successes, but there is a need for enhanced cooperation across disciplines to make significant progress. The second theme is to demonstrate the effectiveness of tools developed in the "core" on a variety of interesting application areas.

Study areas such as atmosphere and ocean dynamics, material microstructures, and biomolecular dynamics remain enormous challenges to computational modeling. More CPU cycles are good but will go only so far.

A profound understanding of mathematical modeling coupled with efficient, accurate algorithms in an integrative environment will allow researchers to better understand how water flows in the open ocean and how, for example, it mixes with pollutants. What happens before, during, and after an earthquake fault ruptures? How can we minimize risk of engine failure in any flying condition for the next generation of jet engines? These, and others, are the kinds of problems CIMMS researchers will study, model, simulate, and control.

Strain on an earthquake fault can take many years to build, but release occurs in seconds. Seismic waves can travel across continents, but local effects (in the Los Angeles basin, for example) may be of utmost concern. The difference in both temporal and spatial scales for these phenomena is enormous.

A jet engine involves the complex interaction of fluids, combustion, fan blades, and other engine parts that operate on many different scales. One needs to operate and control such complex processes, often close to stability margins, for greater efficiency. A representative CIMMS task is the creation of tools and techniques to enable virtual jet engines to reliably simulate flight events, material properties, and dynamical phenomena.

Perhaps the greatest multiscale system is our own solar system, contained within our Milky Way galaxy. One can observe the planets moving on a grand scale while simultaneously witnessing the delicate intricacies of Saturn's rings and the turbulent red spot on Jupiter, with its own "whorls within whorls."