Profile of an Everywhere Man 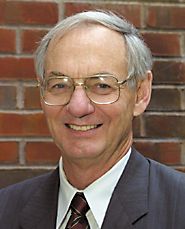 Paul Jennings ran the gamut at Caltech from student to Professor, Chairman, Provost, acting Vice President for Business and Finance and, this year, Professor Emeritus. He says that he enjoyed his career as Professor most and is now looking forward to an academic career with no duties and no commitments during which he can do all those jobs that he has in his mind and did not have time to do.

Paul was born in 1936 in Brigham City, Utah and grew up in Paonia and Grand Junction, Colorado where he began his love affair with trout fishing in mountain streams. He always liked the outdoor life. In high school he thought of becoming a Forest Ranger and even got a summer job in Alaska, which cured him of this idea. He obtained a BS degree in civil engineering from Colorado State University and then came to Caltech for graduate studies, obtaining his PhD degree in 1963. At that time, the draft was still in effect, but an ROTC student could get deferment to do graduate studies and then owe the military three years of duty. In the spring of 1963, Archie Higdon, author of several pre-war engineering mechanics books, visited Caltech and told me that he was responsible for the teaching of mechanics at the newly organized Air Force Academy. He would identify the bright young men who were getting their PhDs and owed the three years and would then have them assigned to the Air Force Academy. He said that he intended to have Paul Jennings and Wilfred D. Iwan [BS '57, MS '58, PhD '61, Director, Earthquake Engineering Research Laboratory] come to the Academy to teach mechanics and, in fact, that was arranged.

In 1964 there came the great Alaska earthquake, Richter magnitude 8.4. I, as well as Donald Hudson and Ronald Scott were drawn into the activities, in particular, preparing the engineering report on the Alaska earthquake for the National Academy of Sciences. As Paul's PhD research had been on destructive earthquakes, he seemed a logical person to help in this effort. A request was made to the Air Force, and Paul was assigned to Caltech for over a year.

Paul was appointed a Member of the Engineering Panel of the National Academy of Sciences Committee on the Alaska earthquake and made several trips to Alaska to view the damage and to collect data. The Caltech efforts resulted in a massive report containing 31 papers, several of which include his name as author. He was released from the Air Force in December of 1966, six months early in an economy move that occurred just as the Vietnam War effort was building. Paul was appointed Assistant Professor on January 1, 1966, at a salary of $10,500 and embarked on his academic career.

For the next 20 years, Paul had an active academic life: teaching, supervising PhD students, doing research and publishing 48 technical papers. He was widely recognized as one of the leaders in the field of earthquake engineering. He also was engaged in many extracurricular pro bono activities, including serving as president of the Earthquake Engineering Research Institute and president of the Seismological Society of America. He also served on numerous national committees, including the National Research Council Committee on Seismology and the National Research Council Committee on Natural Disasters, which he chaired. He was also a member and later chairman of the Charles Stark Draper Prize Committee of the National Academy of Engineering. During these years he served as consultant on the seismic design of most of the Exxon Hondo deep-water oil drilling platforms in the Santa Barbara channel and also the fifty-two story Atlantic Richfield Tower buildings in Los Angeles, as well as others.

In 1985 Paul was appointed Chairman of the Engineering Division which began his administrative career. After four years, he was appointed Vice President and Provost and worked with President Thomas Everhart. When his term as Provost ended, the position of Vice President for Business and Finance was vacant because David Morrisroe unexpectedly had to retire for health reasons. Paul was asked to serve in this position until a permanent appointment could be made. He served for one year and then returned to being a professor, only to come back and serve again in 1998-1999 as Acting Vice President for Business and Finance, during the interim between John Curry and William Jenkins. In the fall of 1999 he again returned to the faculty. In that year he also received the Best Paper of the Year Award from Spectra, the journal of the Earthquake Engineering Research Institute. He again resumed a slate of professional activities. For the past three years he has served as the chair of the California Council on Science and Technology. He is presently the chair of an administrative committee charged with proposing a new campus center building at Caltech.

When President Nixon visited Chairman Mao, they agreed that China and the U.S. should cooperate, especially in science. Apparently the only scientific subject that appealed to both sides was earthquakes...

During his professorial career, Paul has traveled to many countries—Spain, Italy, Turkey, Japan, China, India, and others--to investigate or to confer on earthquakes. The trip to China had special significance. When President Nixon visited Chairman Mao, they agreed that China and the U.S. should cooperate, especially in science. Apparently the only scientific subject that appealed to both sides was earthquakes and so some trips were arranged for Chinese teams to come to the U.S. and for U.S. teams to visit China. Paul was a member of the U.S. National Academy of Sciences team that visited China in 1978 and spent three weeks visiting various locations and earthquake laboratories. The main purpose for making this trip was to learn about the Great Tangshan Earthquake of 1976, which devastated the city of Tangshan and the surrounding countryside and killed an estimated 500,000 people. When the team returned to the United States, Paul was editor of the report published by the National Academy of Sciences that described what was learned during the trip.

Although Paul is now Professor Emeritus, he has not yet shaken the administrative dust from his coat. He is still involved in various tasks. He expects that in due course he will be free at last, and he is looking forward to twenty more productive years of academic life.

The author, George W. Housner, is the Carl F. Braun Professor of Engineering, Emeritus, and is an MS '34, and PhD '41 graduate of Caltech.