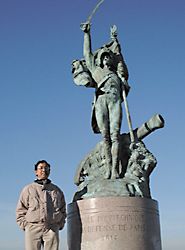 ÉCOLE POLYTECHNIQUE (commonly referred to as l'X), founded in 1794 during the French Revolution and currently under the auspices of the Ministry of Defense, is one of the most renowned of a distinctive class of French educational institutions called "les Grandes Écoles." Spread over 440 acres on the Saclay plateau and situated in Palaiseau in the southern suburbs of Paris, it has approximately the same size student body as Caltech—about 900 undergraduates.

My family's most memorable experiences so far, besides the wonderful sights France has to offer (the Chateaux, monuments and museums), are our social interactions with the French families, especially that of Dr. Yves Leroy. We have been welcomed with open arms and included in all their holiday celebrations, thus immersed into French culture. The warm hospitality and friendliness of the people here have impressed us. The city of Paris itself comes across as a living museum and one can experience history at every street corner.

In September 2001, Guruswami Ravichandran, Caltech Professor of Aeronautics and Mechanical Engineering, began a one-year residency at the Laboratoire de Mecanique des Solides (LMS) at École Polytechnique as a Directeur de Recherche Associe on invitation from the Centre National de la Recherche Scientifique (CNRS). Ravichandran has traveled to France with his wife and two children.

His principal colleagues at École Polytechnique are Drs. Yves Leroy and Jean Raphanel of the LMS. Dr. Yves Leroy was the first PhD student of Professor Michael Ortiz at Brown University; Ortiz is currently Professor of Aeronautics and Mechanical Engineering at Caltech. LMS has a distinguished history as one of the largest CNRS research laboratories in France; home to over 100 researchers with expertise in theory, modeling, and experiments. Ravichandran is primarily an experimentalist with research interests in mechanics of materials--particularly those pertaining to their dynamic behavior--and heterogeneous and active solids. He is using his time away from Caltech to work on modeling and computational analysis of mechanics problems associated with crystals, defects, and heterogeneous materials, as well as stability of deformation in solids. From his interactions with members of the Mecano-Tectonic group in Paris, he is learning about applications of mechanics to problems in geology.

The responsibilities are essentially to conduct research in the field of solid mechanics and interact with scientists within the laboratory (LMS) that I am visiting at the École Polytechnique. The title itself, Directeur de Recherche Associe, means Visiting Senior Scientist.

He is using this opportunity to visit other laboratories and universities in France for updates on the research that is being conducted in mechanics, while still keeping up with his group at Caltech. He is also spending time in the library thinking about new directions for his own research. The outstanding hospitality of the researchers and staff at LMS and the ambiance of École Polytechnique have made his visit a rich and rewarding experience.