Bernard Yurke and Friends are Filling the Nano Toolbox

Bernard Yurke, who generally resides at Bell Labs as a Distinguished Member of the Technical Staff, is visiting Caltech as a Moore Scholar through September 2004. His scientific contributions span many fields, from cosmology to materials science, but here at Caltech he is pursuing his latest passion, using DNA to construct nano-structures and nano-devices. He shares with us the details of the projects he will be working on during his Caltech sojourn.

My research at Caltech is focused on using DNA to construct nano-structures and nano-devices, and is divided into two main areas of activity. One is directed toward the construction of free running DNA-based molecular motors. The second is directed toward assembling sheets of DNA that could be used as contact masks for creating precisely patterned surfaces, specifically semiconductor surfaces. 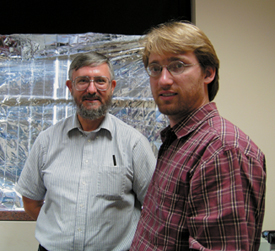 A number of DNA-based devices that can produce repetitive motion have been described in the literature. Most of these motors are based on principles I illustrated with the construction of a device I like to refer to as molecular tweezers. The device consists of two double-stranded DNA arms that are connected by single-stranded DNA. This singlestranded section of DNA serves as a flexible joint that would allow one to bring the two arms together if one had eyes acute enough to see something that is seven nanometers in length and if one had fingers dexterous enough to manipulate something that small.

We were able to close and open this device using a DNAbased motor. The motor consisted of two single strands of DNA, one extending from each pincer end of the tweezers. A strand of DNA that I refer to as a “fuel” strand is able to hybridize with these single-stranded extensions to form double- stranded DNA. The process of forming these double strands pulls the arms of the device shut. The tweezers are returned to their open configuration by introducing the complement of the fuel strand. The complement is able to remove the fuel strand from the tweezers through competitive binding, thereby forming a double-stranded waste product. DNA-based motors of this type are able to develop 15- picoNewton forces, which may sound really small, but biological molecular motors typically develop forces in the 5- to 30- picoNewton range. The tweezers motor and others using the same principles are clocked motors. That is, they are driven through their sets of states through successive application of fuel and removal strands. If one adds the fuel and removal strands at the same time, these strands will mostly hybridize with each other directly without interacting with the motor. This behavior is different from that of many biological molecular motors found in nature that are able to keep running because the fuel molecules are stable unless they interact with a molecular machine that is able to use the fuel.

The challenge is to devise DNA-based structures that can operate like the fuel and removal strands but that do not interact with each other except through a DNA-based molecular motor. Erik Winfree [Assistant Professor of Computer Science and Computation and Neural Systems; PhD ’98] and I have designed a set of DNA strands that should form such structures that are stable until a DNA strand with a specific base sequence is present. This special DNA strand would behave like a catalyst and could be used as the motor for a free-running DNAbased device. Much of my work here at Caltech will consist of measuring the reaction rates for various components of this device to debug and verify its performance. Perhaps such motors will allow a realization of Feynman’s vision* as expressed in his talk “There’s Plenty of Room at the Bottom.”

With the second project I hope to construct DNA-based contact masks that would allow one to pattern semiconductor materials such that the smallest feature sizes will be on the order of 2 nanometers or better. This would be about an order of magnitude smaller than what can currently be done with electron-beam writing.

Winfree has shown that one can construct DNA-based tiles that assemble into two-dimensional sheets, often as large as 10 microns by 2 microns in size. The base sequence of the single-stranded extensions that serve to bind two tiles together through hybridization of complementary sequences can be chosen at will. That, in effect, makes the tiles programmable so that the DNA sheet that is assembled is a very complex tapestry. This tapestry can be decorated with gold particles. The complex pattern of gold particles could serve as a mask to produce patterns on some substrate that the DNA sheet has been deposited on. Erik’s group has shown that DNA tiles can assemble to produce a variety of tapestries having patterns that are of interest in electronics. For example, on paper, they have devised sets of tiles that will assemble into the kind of pattern that would be appropriate if one were trying to make an address demultiplexer, a typical integrated circuit.We hope to actually try out these sets of tiles to see how well they work in practice.

The tapestries produced by DNA tiles are easily imaged using an atomic-force microscope [see images at upper left]. This will be a major tool in our investigations. In this project I am also collaborating with Michael Roukes [Professor of Physics, Applied Physics, and Bioengineering] and members of his group to try to devise a lithography procedure that could transfer the tile patterns to a substrate. Since I am a Moore Scholar working in the Moore Laboratory, it is perhaps appropriate that I should be trying to push lithography to its ultimate limit.

*The prospect of mass-producing atomic-scale machines was first publicly envisioned in 1959 by Caltech Professor Richard Feynman. His lecture is now widely known, and serves as one inspirational cornerstone of today’s nanotechnology research.

For further information see the websites for the research groups of Erik Winfree and Michael Roukes, Yurke’s website at Bell Labs, as well the Feynman lecture at:
www.dna.caltech.edu
nano.caltech.edu
www.bell-labs.com/org/physical
sciences/profiles/yurke.html
www.its.caltech.edu/~feynman/plenty.html