Professor Elowitz’s interests are in biophysics, particularly gene regulation networks, biocomputing, and the origins of variation in living cells. Elowitz is interested in how cells process information and develop using circuits composed of interacting genes and proteins operating in the unfamiliar intracellular environment. He is equally interested in the opposite question of how novel networks can be engineered within cells to implement alternative cellular behaviors. Elowitz and his researchers will address these complementary questions together using a combination of experimental and theoretical techniques. Elowitz received a BA degree in Physics from the University of California in 1992, and a PhD in Physics from Princeton University in 1999. Most recently, Elowitz was a fellow at Rockefeller University.

Professor Yang’s research area is biophotonics, the imaging and extraction of information from biological targets through the use of light. His primary interest is the application of novel interferometric and nonlinear optical processes for non-destructive biomedical imaging. He has developed a low-coherence interferometric phase technique that is capable of probing the small (nanometer scale) and slow (nanometer/second) dynamics of living cells. He is interested in applying the method to study the physical response of cells to subtle changes in their environment and the physical manifestation of cell-to-cell interactions and synchronizations. Professor Yang’s other major research focus is in the development of molecular contrast optical coherence tomography (MCOCT). Optical coherence tomography is the optical equivalent of ultrasound tomography; it is capable of high-resolution architectural imaging of biological targets. Professor Yang is working on exploiting the photochemical properties of specific protein-based chromophores to introduce molecular contrast imaging capability into OCT. Yang received his BSc (Physics, 1997), BSc (Electrical Engineering, 1997), BSc (Mathematics, 2002), MEng (Electrical Engineering, 1997) and PhD (Electrical Engineering, 2002) degrees from the Massachusetts Institute of Technology. Since graduation, he has worked as a post-doctoral fellow at ESPCI (Paris) and Duke University. 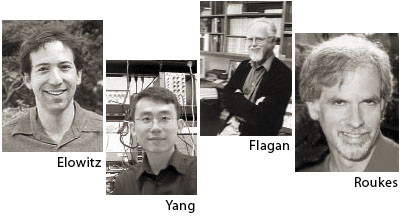 Richard Flagan: Irma and Ross McCollum Professor of Chemical Engineering and Professor of Environmental Science and Engineering (joint appointment with Chemistry and Chemical Engineering) Professor Flagan’s research focuses on understanding the role of atmospheric aerosols and related processes on air quality and global climate. This work elucidates the physical processes that enable pollen and other airborne allergens to penetrate deep into the respiratory tract where they may trigger asthmatic attacks. The research also advances aerosol technologies for the synthesis of nano-structured materials and devices. The common threads underlying these areas are an understanding of the dynamics and behavior of suspensions of small liquid or solid particles in gases, and the goal of advancing experimental methods for investigation of those particles. Flagan received a BSE degree in Mechanical Engineering from the University of Michigan in 1969, and his SM (1971) and PhD (1973) degrees from the Massachusetts Institute of Technology.

Professor Roukes’s research activities are currently focused upon developing and using nanodevices in the exploration of single-quantum and single-molecule phenomena. The systems he and his group are building have a range of applications that span fundamental measurement, engineering, and biological and medical sciences. Recently they created a mechanical device that vibrates a billion times per second. Roukes received a BA in Physics and a BA in Chemistry from the University of California, Santa Cruz in 1978, and a PhD in Physics from Cornell University in 1985. 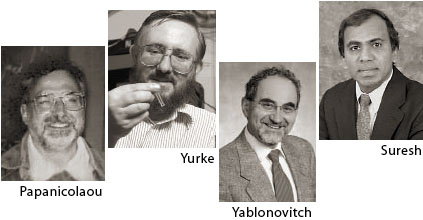 Professor Papanicolaou’s interests are in waves and diffusion in inhomogeneous or random media and in the mathematical analysis of multiscale phenomena that arise in their study. Applications come from electromagnetic wave propagation in the atmosphere, underwater sound, waves in the lithosphere, diffusion in porous media, etc. He has studied both linear and nonlinear waves and diffusion, in both direct and inverse problems. Papanicolaou is now working on assessing multi-pathing effects in communication systems, especially when time-reversal arrays are used. Another recent interest is financial mathematics, especially the use of asymptotics for stochastic equations in analyzing complex models of financial markets and in data analysis. Papanicolaou received a BEE from Union College in Schenectady, N.Y. in 1965, and his PhD in Mathematics from New York University, Courant Institute in 1967.

Professor Yablonovitch’s research focuses on optoelectronics, high-speed optical communications, nanocavity lasers, photonic crystals at optical and microwave frequencies, quantum computing, and communication. Yablonovitch graduated with the PhD degree in Applied Physics from Harvard University in 1972. He worked for two years at Bell Telephone Laboratories, and then became a professor of Applied Physics at Harvard. In 1979 he joined Exxon to do research on photovoltaic solar energy. Then in 1984, he joined Bell Communications Research, where he was a Distinguished Member of the Technical Staff and also Director of Solid-State Physics Research. In 1992 he joined the University of California, Los Angeles where he is Professor of Electrical Engineering.

Bernard Yurke: Bell Laboratories, Lucent Technologies
Dr.Yurke has been working at the forefront of physics in a number of areas, including low-temperatures physics, quantum optics, liquid crystals, biophysics, and MEMs devices. His current main interest is in constructing nanostructures and nanodevices using DNA. Past research projects have included the generation and detection of squeezed states at optical and microwave frequencies, the study of phase-ordering kinetics in liquid crystals, and force generation of microtubules. Yurke also is active in the development of quantum measurement schemes with phonons in nanostructures, and mechanical quanta in ultraminiature mechanical devices. Yurke received BS (1975) and MA (1976) degrees in Physics from the University of Texas at Austin, and his PhD (1983) in Physics from Cornell University. Since 1982 he has been a researcher at Bell Laboratories, Lucent Technologies in both the Optical Physics and Materials Research Departments. He has been a Distinguished Member of the Technical Staff at Bell Labs since 1987.

Professor Suresh’s interests are in nanoscale mechanical properties of engineering and biological materials, and in the connections between structure, properties, and function. He is the author/coauthor of two books, Fatigue of Materials and Thin Film Materials, both of which have been published by Cambridge University Press; coauthor of nearly 200 journal publications; and coinventor in approximately 15 patent applications. He has been elected a member of the U.S. National Academy of Engineering, a fellow of ASME, TMS, ASM and the American Ceramic Society, and an Honorary Member of the Materials Research Society of India. He has previously held the R. P. Simmons Professorship at MIT, the Clark B. Millikan Visiting Professorship at Caltech, and the Swedish National Chair in Engineering at the Royal Institute of Technology.