From Cellular Systems to Gravitational Systems, and Almost Everything in Between

At its simplest, control is achieved when a sensed quantity is used to modify the behavior of a system, as one does in everyday life, such as driving a car and walking. In technology, control is often achieved through computation and actuation, as in automotive controls or controlling a spacecraft. More formally, control makes use of algorithms and feedback in engineered systems, and is a means of ensuring robustness in an uncertain environment. Dynamical systems refers to the way systems change over time, such as the movement of your car, the dynamics of walking, or the dynamics of a molecule or of the solar system. More formally, it is the study of processes described by evolutionary equations such as ordinary and partial differential equations. The rigorous bringing together of these ideas and concepts, including their applications as well as the needed mathematics resulted in the birth of the Control and Dynamical Systems Option at Caltech in 1993.

The original vision was to take advantage of the emerging important areas of nonlinear control systems, dynamical systems, and their essential interactions. This has proven to be extremely viable, and the Option remains at the cuttingedge of its domain. It has positioned itself as a key player in the development of the theory, computation, and application of complex systems, dynamical systems, and control, focusing on fundamental theory. One of its unique features is its extensive scientific interaction with many other options at Caltech, such as Applied and Computational Mathematics, Biology, Bioengineering, Computer Science, Computation and Neural Systems, Environmental Science and Engineering, Mechanical Engineering, Electrical Engineering, Aeronautics, Mathematics, Physics, and Chemistry.

The core faculty members—John Doyle, Hideo Mabuchi, Jerrold Marsden, Richard Murray—are joined by Senior Research Associate Doug MacMartin to form the CDS Faculty. These are joined by affiliated faculty members Joel Burdick (ME), Fred Culick (GALCIT and ME), Babak Hassibi (EE), Steven Low (CS and EE), Pietro Perona (EE), Thanos Siapas (CNS), Tapio Schneider (ESE), and Michael Dickinson (BE), and by a steady flux of visiting scholars from universities worldwide. Altogether, the group has turned CDS into an extremely sought-after graduate program. In fact, the number of graduate students accepting offers of admission, 67%, is one of the highest in the Division.

In the area of biology, a fundamental question that remains to be answered is how do individual molecular mechanisms together with network interconnection create robust behavior from uncertain components in an uncertain environment?

The transition from organisms as genes, to organisms as networks of integrated chemical, electrical, fluid, and structural elements is of course an enormous challenge, but it parallels similar evolution of plans for more integrated engineering networks. Both motivate the development of theories of uncertainty management for complex, interconnected, multiscale systems. The focus of John Doyle,Professor of Control and Dynamical Systems, ElectricalEngineering, and Bioengineering, is on complex biological and engineering networks, particularly the interplay between complexity and system fragility/robustness. He has begun to discover “fragility conservation laws” that could eventuallybe as important in complex networks as mass/energy conservation laws have been to traditional science and engineering. His research shows that biological complexity is dominated by the evolution of mechanisms to more finely tune the tradeoff between robustness and fragility. The systems he studies are often biological: the heat-shock response, metabolic pathways, biological signal transduction, but also include collaborations with Steven Low on internet protocols. The mathematical tools necessary for this work are diverse and include operator theory, real algebraic geometry, computational complexity theory, and semi-definite programming. Long term, this work may have medical implications in many areas, including for example multi-organ failure in intensive care and antibiotic therapies that could exploit network-level fragilities. It has already contributed to the FAST methods for designing new internet protocols that are currently being tested and deployed. 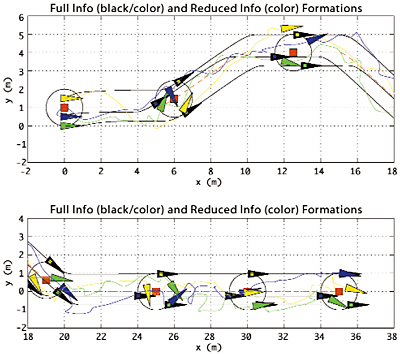 Interest in stabilizing and maneuvering a formation of multiple vehicles has grown in recent years. Applications include grid search by coordinating robots, surveillance using multiple unmanned air or ground vehicles, and synthetic aperture imaging with clusters of micro-satellites. Murray and his colleagues have come up with new approaches that cast the mathematical problems that must be solved to into global optimization problems rather than local optimization problems for each individual vehicle. This leads to improved behavior as shown above. The global model (full info) is represented by the trajectories of the black vehicles. The local model (reduced info) is represented by the trajectories of the colored vehicles. Notice the colored vehicles intersect at times; this correspond to collision in real implementations.

Hideo Mabuchi (PhD ’98), Associate Professor of Physics and Control and Dynamical Systems, recently joined CDS (his first home is in the Physics department), as it has become clear that in quantum networks and quantum information technology, robustness, quantum interconnection, and feedback are key issues. Quantum technologies could be powerful, but are profoundly sensitive to errors andnoise. It has been in control theory that robustness and related topics have seen the most significant developments,which is why it makes perfect sense for a quantum physicistto join the CDS encampment. He is also working with Doyle on new theoretical methods for treating systems far from thermodynamic equilibrium, particularly when this is regulated and aintained by complex feedback systems.Another view of many of the same questions centers around problems with many scales. Multiscale phenomena occur throughout science and technology: from fluid dynamics, where resolving smallscale motions can be a crucial computational bottleneck, to materials science, where small defects or phase changes can affect large scales, to biology, where phenomena on the molecular level and the microsecond time scales affect those on cellular and second scales. To work on these types of problems, Jerrold Marsden, Carl F Braun Professor of Engineering and Control and Dynamical Systems, has recently driven the formation of CIMMS, the Center for Integrative Multiscale Modeling and Simulation. The researchers under the CIMMS umbrella are working on problems that will have application in diverse areas: the Internet, power networks, and acoustic and elastic wave scattering from multiscale heterogeneities. In these and many other areas, a multiresolution infrastructure is called for—involving ideas from mathematics, mechanics, andcomputer science—to resolve length and time scales in a systematic, hierarchical way. For example, in the modeling of certain physical systems, it is a challenge to computethe larger, resolvable coarse scales reliably, while accuratelymodeling the net effect of the smaller, or subgrid scales. Recent developments in modeling and algorithms, for example those based on variational and quasicontinuummethods, demonstrate a new era in our ability to accurately simulate turbulent flows, as well as the complex behavior of nonlinear materials. Marsden is currently the director of CIMMS.

Marsden is a unique figure as his work has significantly influenced the three distinctly separate communities of mathematicians, physicists, and engineers. For these contributions, he was honored by the Fields Institute in Canada on the occasion of his 60th birthday in August 2002, with a international workshop organized along the seven main themes of his work: geometric mechanics, fluid mechanics, elasticity and analysis, numerical algorithms, relativity and quantum mechanics, geometric control theory, and dynamical systems.

His current specific research projects involve faculty both at Caltech and other universities and many affiliated students and postdocs. With Tudor Ratiu from Lausanne and other workers in geometric mechanics worldwide, he continues basic investigations into the mathematics that is key to the foundations of mechanics.With Professor Michael Ortiz in GALMarsdenCIT and Mechanical Engineering, he is studying structured integration algorithms for solid and fluid mechanical systems. And with Naomi Leonard at Princeton, work is being done on the AOSN-II project (Autonomous Ocean Sampling Network), which is a unique mix of control of underwater vehicles, their own dynamics as well as the dynamics of the ocean. He is working on the dynamics of the solar system and space mission design and control, as well as on phase space structure and transport in dynamical systems, including applications to solar system dynamics and biomolecular systems (with Wang Sang Koon of Caltech, Martin Lo [BS ’75] of JPL, Michael Dellnitz from Paderborn,Germany and Igor Mezic [PhD ’94] from UC Santa Barbara). He is also working on averaging and other multiscale methods in systems, such as fluid mechanics, with Yannis Kevrekidis of Princeton, Darryl Holm of Los Alamos, and Kamran Mohseni (PhD ’00) from Boulder.

Richard Murray (BS ’85), Professor of Mechanical Engineering, was instrumental in founding the CDS Option, and continues his research broadly in the area of nonlinear dynamics andcontrol of mechanical, fluid, and materials systems, with applications to aerospace vehicles, robotics, turbomachinery, and thin-film processing. Murray has been serving as the Chair of the Division of Engineering and Applied Sciencesince July 2000, but manages a full research schedule as well. He is the Project Director for Team Caltech (see the Snap Shots section on page 4 about Caltech’s DARPA Grand Challenge entry).Working with Dr. Doug MacMartin and Professor Tim Colonius (in Mechanical Engineering), Murray developed and demonstrated approaches to active feedback control of turbomachinery (gas turbines and inlet/compression systems). He is also working on distributed control systems that can be dynamically reconfigured; such systems would, for instance, have application in multi-vehicle motion control systems. Imagine the precision and agility of a flock of birds; now imagine a group of unmanned reconnaissance planes flying in DoD missions.

Several of Murray projects are implemented on the Caltech Multi-Vehicle Wireless Testbed (MVWT), which consists of eight mobile vehicles with embedded computing and communications capability for testing new approaches for command and control across dynamic networks. The system allows testing of a variety of communications-related technologies, including distributed command and control algorithms, dynamically reconfigurable network topologies, source coding for realtime transmission of data in lossy environments, and multi-network communications. A unique feature of the testbed is the use of vehicles that have second-order dynamics, requiring real-time feedback algorithms to stabilize the system while performing cooperative tasks. The MVWT is part of the CaltechVehicles Laboratory. The testbed is populated with individual vehicles with PC-based computation and controls, and multiple communicationsdevices (wireless ethernet and Bluetooth). The vehicles are freely moving wheeled platforms propelledby high-performance ducted fans. The laboratory contains accesspoints for wireless communications,overhead visual sensing to allowemulation of GPS signal processing,a centralized computer foremulating certain distributed computations,and network gateways tocontrol and manipulate communicationstraffic.

Murray is also active in theControl and Dynamical SystemsAlliance (CDSA), which is developinga shared curriculum at leadingresearch and educational institutionsin the United States andBrazil. Graduate and undergraduatestudents are encouraged to studyand undertake research projects atAlliance universities here and inBrazil. A central focus of theCDSA is to develop new approachesto education and outreach forthe dissemination of basic ideas incontrol and dynamical systems tonon-traditional audiences. Theseideas are implemented in a newcourse at Caltech, CDS 101,Principles of Feedback andControl. It is co-taught by Murray,Mabuchi, MacMartin, MichaelDickinson (Bioengineering), andSteven Low (Computer Scienceand Electrical Engineering).The evolution of the Optionhas been remarkable for such ashort time span; with bridges acrosscampus and across continents, CDScontinues to thrive.