Digital logic and water usually don't mix. But that's exactly what we are trying to do. Recent work in our lab, lead by postdoctoral researcher Georg Seelig and graduate students David Soloveichik and Dave Zhang, demonstrates a new method for creating logic circuits out of DNA that work in a test tube—taking chemical input and producing chemical output. Because these circuits operate under conditions mimicking an intracellular environment, this research may be a step toward designing a "micro-controller" for biological cells and other complex chemical systems.

Our circuits work in water because they are based on chemistry, not electronics. Rather than encoding signals in high and low voltages, these circuits encode signals in high and low concentrations of short DNA molecules. The chemical logic gates that perform the information processing are also DNA; each gate is a carefully folded complex of multiple short DNA strands. When a gate encounters the right input molecules, it releases its output molecule. This output molecule in turn can help trigger a downstream gate—so the circuit operates like a cascade of dominoes where each falling domino topples the next one. However, unlike dominoes and electronic circuits, components of these DNA circuits have no fixed position and cannot be simply connected by a wire. Instead, the chemistry takes place in a well-mixed solution of molecules that bump into each other at random, relying on the specificity of the designed interactions to ensure that only the right signals trigger the right gates.

Making use of this molecular mechanism, we constructed gates to perform all the fundamental binary logic operations—AND, OR, and NOT—that are the building blocks for constructing arbitrarily complex logic circuits. To demonstrate that the circuit elements can indeed be combined and cascaded to compute complex functions, we created a series of circuits, the largest one taking 6 inputs processed by 12 gates in a cascade 5 layers deep (see Figure 1). This is not large by the standards of Silicon Valley, but it demonstrates several design principles that could be important for scaling up biochemical circuits.

While biochemical circuits have been built previously, both in test tubes and in cells, our implementation is novel in that the circuits' functions rely solely on the properties of DNA base-pairing—no biological enzymes are necessary for their operation. This allowed us to use a systematic and modular approach to design the logic circuits, incorporating many of the features of digital electronics.

One especially important design principle in digital electronics is signal restoration, which ensures that even if signals deviate slightly from the ideal levels representing 0 or 1, due to noise or imperfect manufacturing of components, the signals can be correctly interpreted and restored to the ideal levels. This principle was critical to the digital circuit revolution. With restoration, components did not have to be perfect: if a gate outputs a slightly smaller or larger signal than intended, the downstream components have no trouble determining the intended output of the gate. This allowed the components to get small and cheap, and to be robust to electrical noise. Similarly, we were able to implement signal restoration in our biochemical circuits by designing special thresholding and amplification gates that produce output strands at either a very low or a very high concentration, depending on whether the input was above or below a threshold level. By implementing digital logic in chemistry, our circuit was able to produce the correct output even when "noise" was introduced and not all gate molecules performed perfectly (see Figure 2).

[We are also] inspired by an indirect attempt to understand the hypothetical "RNA world," a time four billion years ago when all the major tasks within primitive cells were carried out by complex RNA molecules.

Another critical aspect of digital electronics is the standardization of signals. This allows components such as microprocessors that are created by different companies and for different purposes to be hooked up any way an engineer wants. This is a challenge for chemical circuits. Because chemical circuits operate in a well-mixed solution, hooking up components cannot be done simply by wiring them together; the molecules themselves must be redesigned to interact with the intended inputs and outputs. Fortunately, this is a systematic process in our circuits: the logic gates themselves have a modular design with independent input and output domains. For example, this makes it easy to design "translator gates" that can be used to wire together pre-existing components that use distinct molecular signals. This modular design is especially helpful for interfacing with existing biological components. We demonstrated this by using microRNA sequences, part of a recently discovered genetic control system in biology, as inputs to the circuits. Being able to "read in" microRNAs as inputs and to process information contained in specific microRNA expression patterns may become a powerful way of detecting specific cellular abnormalities, such as the exact type of cancer in a tissue sample or even in vivo. 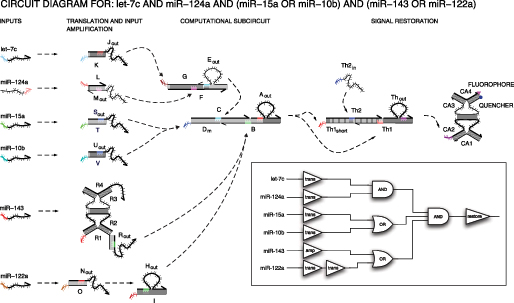 While they incorporate design principles from digital logic, these biochemical circuits are not meant to solve the math problems computers are so remarkably good at. Compared to modern electronic circuits, these circuits are painstakingly slow and exceedingly simple. Rather, our work builds on and contributes to the fast-growing discipline of synthetic biology, in which the engineering of biochemical circuits—ranging from genetic and metabolic networks to signal transduction cascades—is directed toward creating circuits that take molecules as input and produce molecules as output. These efforts will enable a new generation of technologies for embedding "intelligence" in chemical systems, with potential bionanotechnology and biomedical applications. In such engineering endeavors, it is certainly worthwhile to see what we can learn from the construction of electronic circuits. After all, digital logic has arguably changed the way we live more than any other invention in the second half of the previous century.

This discussion might lead you to think that our motivation in creating these biochemical circuits was purely technological. Partly true. But it was also largely inspired by an indirect attempt to understand the hypothetical "RNA world," a time four billion years ago when all the major tasks within primitive cells were carried out by complex RNA molecules. This hypothesis implies that although proteins may be better at many chemical tasks, and have now largely taken over, they aren’t absolutely necessary: nucleic acids can do the job also, be it catalyzing chemical reactions, carrying information, or serving as structural molecules. This changes the bias about what kinds of chemistry are necessary for engineering complex and functional molecular systems.

With that perspective in mind, the immediate stimulus for our work was the convergence of several research threads. Dave Zhang, interested in engineering biological circuits, had been pondering the origin of life and wondering what the simplest self-replicating molecular systems might be—which led him to the idea of designing cascades of DNA-DNA interactions, the precursors of our "translator gates."

Meanwhile, David Soloveichik, lost in the clouds of theoretical computer science, was fascinated with how simple chemical reaction systems could compute, and he recently analyzed the computational power of molecular automata created by Benenson and Shapiro at the Weizmann Institute of Science. Finally, Georg Seelig, who has spent the last year characterizing a novel DNA-based catalyst, was looking for ways for his fundamental work to find applications to biomedical therapeutics—with the dream of contributing to efforts developing "smart" drugs to cure cancer or other diseases.

Exactly how these threads combined and led to the genesis of our DNA logic gates and circuits may forever remain shrouded in mystery, but I distinctly recall when, not much more than a year ago, David and Georg emerged from Georg's office with big smiles and announced, "We have to go to dinner." We designed and ordered the DNA strands for an AND gate—and a week later the strands arrived. A few days after that, the very first experiments showed that the system worked exactly as predicted!

In about two weeks, we had gone from inspiration to a minimal publishable unit. I've never had that experience before or since. It clearly told us that we were on the right track, and that if we pushed it we had a chance to demonstrate something significant.

Where is this going? Our work is part of a broader vision for engineering the DNA nanotechnology systems being developed by Ned Seeman (at New York University), Niles Pierce (here at Caltech), and others. Ultimately, we'd like to be able to program biochemical circuits. Silicon computers are programmed by defining, in a high-level language, how to perform a task, and this specification is then translated by a compiler to create an executable binary file that runs on the CPU. Similarly, it now seems possible to give a high-level specification for the logical function a DNA-based circuit should perform, and to automatically compile it into DNA sequences for the required logic gates, which work in solution.

Erik Winfree is Associate Professor of Computer Science and Computation and Neural Systems.
Learn more about the DNA and Natural Algorithms Group at: http://www.dna.caltech.edu