Astronomers and Astrophysicists: Under One Roof 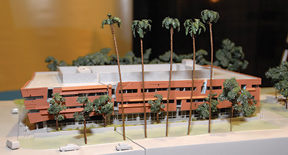 In December 2008, astronomers and astrophysicists at Caltech will have a new home. Last January, the campus community gathered to break ground for the Cahill Center for Astronomy and Astrophysics. For the first time, Caltech's astronomers and astrophysicists will be housed in one building. "Pulling together the Division's many activities in astronomy and astrophysics to achieve optimal synergy has been our goal for some time," says Tom Tombrello, Division Chair for Physics, Mathematics, and Astronomy. "The Cahill Center is an essential step in this progression." The $50 million center will be located on the south side of California Boulevard, between the Institute's athletic facilities on the south and the rest of the campus on the north. Internationally recognized architect Thom Mayne and his firm, Morphosis, designed the visually impressive, yet functional structure.

Keep track of the construction at: http://cahill.caltech.edu 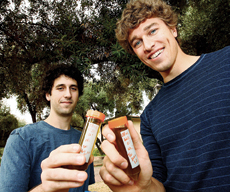 Left to right: Undergraduates Dvin Adalian and Ricky Jones on the Olive Walk.

Upon encouragement from Caltech's new president (and an invitation to Chez Chameau upon success), students Dvin Adalian and Ricky Jones went into olive oil production last fall. Gallons of olives from the Olive Walk's Olea europaea specimens, many blenders, five screens and some processes better left undescribed all went into the first pressing of Caltech's very own. Although not ready for a Caltech spin-off, the students were successful enough to dine with President Chamaeu and his wife, Carol Carmichael, several weeks later. 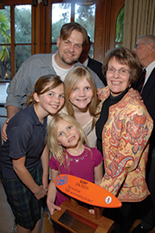 Carolyn with her son, Steve, and granddaughter’s Madelyn, Skylar, and Hayley.

After 30 Years at Caltech, Carolyn Ash, Director of Student-Faculty Programs, is hanging up her SURF board and heading off to retirement. Carolyn’s contributions to the Institute and undergraduate research are enormous and immeasurable—hard to quantify even for a place like Caltech. Over 400 students now participate each year in the Summer Undergraduate Research Program (SURF) that she nurtured and expanded over many years. Many of the students increasingly find SURF opportunities at JPL—so many that Dr. Charles Elachi, Director of JPL and Professor of Electrical Engineering and Planetary Science, remarked at her retirement bash that by extrapolating current numbers, he calculates that the entire work force of JPL will be made up of SURF students by about 2020.

Science is for Kids "Floor-breaking" at The Children's Center 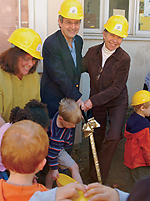 Left to right: President of the CCC Board of Trustees, Marionne Epalle, Caltech President Jean-Lou Chameau, and the CCC Executive Director, Susan Wood.

The Children's Center at Caltech (CCC) is building "The Science Lab at the CCC." Early this year, President Chameau, with president of the CCC board of trustees, Marionne Epalle, and CCC executive director, Susan Wood, led the "floor-breaking" (as one of the kids described it) with help from the youngsters. This indoor-outdoor laboratory, a delightful and creative structure (see image of maquette below), will grow out from two existing CCC buildings. Our budding scientists will be able to perform experiments and make science-based inquiries year round. What a wonderful start!

Get to know the Children's Center.