Making a Dramatic Change by Starting with the Fundamentals 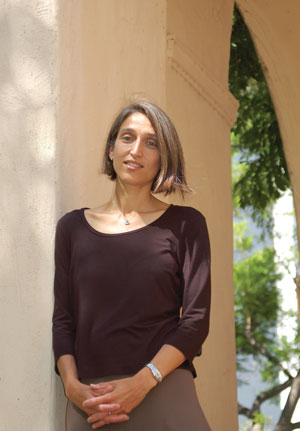 Sandy Irani is a Professor of Computer Science at the University of California, Irvine, and a Visiting Associate in the Caltech Department of Computing and Mathematical Sciences. After making a major change in her research focus, Professor Irani spent a sabbatical year at Caltech’s Institute for Quantum Information (IQI). The abstract nature of math fascinates her, and she spends her days as a computer scientist applying mathematical techniques to fundamental problems in physics.I have had a very dramatic change in my research focus in the last five years. I used to work on online algorithms, and now I’m working more in the area of quantum information and computation. The change came about simply because I got restless and wanted to work on something new. We’re very lucky in academia that we can decide to do something completely different and don’t need to ask anyone’s permission. We just have to learn the new area. It was a big change and a fairly steep learning curve to get into a new area, but it was very interesting. I had a good time learning a new topic.

My previous research area was in traditional algorithm design, and I specialized in applications to computer systems. I worked on things like memory management, web caching, and different ways of computing with low power, like algorithms for powering down laptops and, therefore, all kinds of optimization problems as they applied to computer systems.

I don’t really know what made me change fields; I just wanted to learn something new, and I was really poking around in the dark. What I did know was that I wanted to start with the fundamentals and really learn about the basic science before I jumped in.

I started by taking a quantum mechanics class and actually doing the homework. I was always curious about quantum mechanics. I had never taken it in college and I knew that within computer science, there was a growing community of researchers working on quantum computation.

The idea behind the general area of quantum computation is that we can use matter at the quantum level to store and process information, like storing a bit of information in the spin of an electron. The laws of physics are quite different at this level than they are at the macroscopic level. In theory, at least, if this could be accomplished, we could build computing devices that are much more powerful than conventional classical machines. We can’t actually build these machines yet, but in the meantime, we are trying to answer questions like, if these machines could be built, what exactly can we do with them? What is their power computationally? What kinds of problems can they intrinsically solve?

What I am interested in is asking these kinds of questions in relation to problems in physics. Physicists have been using computers for decades to understand quantum systems: to simulate them over time or to compute their fundamental properties. Some of the techniques have been very successful, some not so successful. They just seem to work well in certain situations. What I wanted to do was to really understand these questions from the point of view of computational complexity. Our business in theoretical computer science is to understand mathematically the computational difficulty of problems and to classify them in terms of their complexity.

The Power of Quantum Systems on a Line. Communications on Mathematical Physics, vol. 287, no. 1, pp. 41-65, 2009.] and hence brought some bad news into the picture. We don’t expect, either with classical computers or even quantum computers, to be able to solve this problem. But there’s a positive side to this result in that the proof involves showing that the lowest energy state of a one-dimensional quantum system can encode the answers to hard problems. So this presents the possibility of a new model for a one-dimensional quantum computer instead of a two-dimensional one.

What I find very compelling about this new field is that by putting computer scientists and physicists together, researchers are actually coming up with new ways to solve physics problems on garden-variety classical computers. These new solutions would not have been uncovered if we had not been looking at these problems through the lens of computation and information. It may be a while before we have large-scale quantum computers, or maybe never, but many interesting things are coming out of the cross fertilization between physicists and computer scientists at national powerhouses such as IQI.

IQI is one of the main reasons I chose to do my sabbatical at Caltech. While there is a lot of exciting research happening at the University of California, Irvine, there is no one else working in quantum information science, so I felt a bit like I was in a silo. Also, I am not free to get up and move across the country for a year because of my family. I was, therefore, lucky to have IQI within driving distance. It’s a hotbed of activity that has been instrumental in bringing people together and creating a center of activity. If you look at the list of postdocs that have come through IQI, it basically reads like a who’s who in the field. There’s a whole community of people working on questions that I’m interested in, and all kinds of related questions in the general field of quantum information. Two other aspects that make IQI so successful are its physical location in the new Annenberg Building for Information Science and Technology and its steady stream of visitors. IQI is a common destination for top researchers and scientists from around the country and the world to come and spend a few days or a few weeks at.

Even though I am no longer on sabbatical, I have been coming back to Caltech on a regular basis to attend talks and work with colleagues. I am sure that IQI will be an important resource for me as I continue to work in this exciting and growing field.