Size Matters: Mechanical Properties of Materials at the Nano-scale 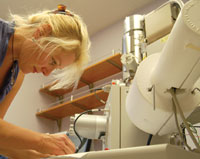 While “super-sizing” seems to be the driving force of our food industry, the direction of materials research has been quite the opposite: the dimensions of most technological devices are getting ever smaller. These advances in nanotechnology have a tremendous impact on parts of the economy as diverse as information, energy, health, agriculture, security, and transportation. Some of the examples include data storage at densities greater than one terabit per square inch, high-efficiency solid-state engines, single-cell diagnostics of complex diseases (e.g., cancer), and the development of ultra-light yet super-strong materials for vehicles, with the sizes of the components of these technological devices reduced to the sub-micron scale. How well these devices function directly depends on their structural integrity and mechanical stability, driving the necessity to understand and predict the mechanical properties of materials at reduced dimensions. 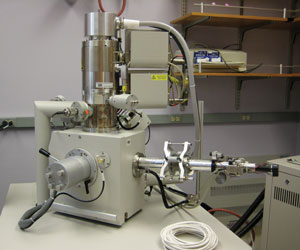 At the nano-scale, yield and fracture strengths, for example, have been found to deviate from classical mechanics laws and, therefore, can no longer be inferred from the bulk (large-scale) response or from the literature. Unfortunately, the few existing conventional experimental techniques for assessing mechanical properties at this scale are insufficient, not easily accessible, and generally limited to thin films. In order to design reliable devices, a fundamental understanding of mechanical properties as a function of feature size is desperately needed. The key remaining question is whether materials really are stronger at the sub-micron scale, and, if so, then why and how.

A major component of my research is the development of innovative experimental approaches to assess the mechanical properties of materials whose dimensions have been reduced to the nano-scale not only vertically, as is the case for thin films, but also laterally.

To enable the development of innovative experimental approaches, when I first arrived at Caltech in 2007, my colleague Dr. Warren Oliver built a unique in-situ mechanical deformation instrument called SEMentor (Figure 1) based on concepts that I had developed. SEMentor is composed of a nanomechanical module, similar to a commercial Agilent nanoindenter, inside a Scanning Electron Microscope (SEM). The former offers a precise control and high resolution of load and displacement (and their rates) as well as contact stiffness during the experiment, while the latter allows the researcher to visualize the process. Most importantly, the SEMentor enables two powerful, and previously unattainable, capabilities: (1) tensile testing, which cannot be accomplished in a regular nanoindenter, and (2) simultaneous video capturing and mechanical data collection, which allows for a direct correlation between sample morphology evolution and specific attributes of the load-displacement curve.

In a striking deviation from classical mechanics, we observe a SMALLER IS STRONGER phenomenon in both fcc and bcc single crystals, manifested by the significant (~50x) increase in strength as material size is reduced to 100 nm (Figure 3). 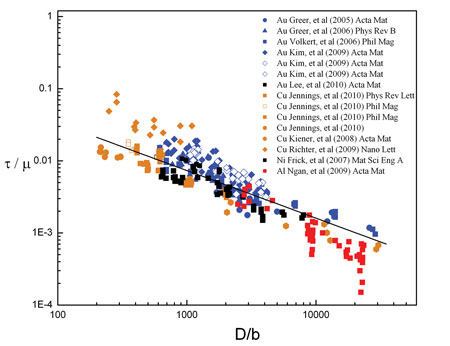 To the contrary, nano-crystalline metals tend to exhibit the opposite trend: SMALLER IS WEAKER. Recently we found that metallic glasses, whose Achilles’ heel has always been the occurrence of catastrophic failure at very small tensile strains, exhibit non-trivial ductility when reduced to the nano-scale. We discovered a transition to very different room-temperature failure and deformation modes of metallic glasses, or amorphous metallic alloys, when reduced to the nano-scale—from highly localized, catastrophic shear band formation to homogeneous deformation, exhibiting non-trivial plasticity and necking before failure [Transition from a strong-yet-brittle to a stronger-and-ductile state by size reduction of metallic glasses. Nature Materials, 2010, 9:215–9.]. Furthermore, unlike in the large scale or bulk, where plasticity commences in a smooth fashion, all of these materials exhibit numerous discrete strain bursts during plastic deformation.

These remarkable differences in the mechanical response of nano-scale solids subjected to uniaxial compression and tension challenge the applicability of conventional plasticity models at this scale. We postulate that the differences in mechanical response arise from the effects of free surfaces, as nanopillars have a much higher surface-area-to-volume ratio compared with bulk. Therefore, surfaces are expected to pose a significant effect on their properties, as manifested by the notable differences in defect activity when deformed. As the deformation mechanisms generally determine the materials’ mechanical properties, the specific effects of surfaces on strength are different for each microstructure class. In fcc and bcc crystals, for example, the mechanical properties depend on dislocation behavior, in nano-crystalline solids they depend on grain-boundary activity, and in amorphous metallic glasses they depend on shear transformation zones. The interactions between these elements with free surfaces serve as the fundamental reason for the observed size-dependent strengths in nano-scale structures.

As for future research, by taking advantage of the powerful new capabilities offered by the SEMentor, as well as the newly developed nano-scale fabrication techniques such as e-beam lithography and electroplating (hence no longer relying on the Focused Ion Beam), we can now address much more complex problems. These problems involve the deformation of a variety of material classes with different initial microstructures rather than single crystalline metals, whose deformation is now relatively well understood.

We are starting to investigate the behavior of materials that contain boundaries as opposed to single crystals only. For example, we are looking at the effects of combining both extrinsic dimensions and intrinsic characteristic microstructural length scales on the mechanical behavior in surface-dominated structures (such as boundary-containing samples, multi-layered structures, and nanocrystalline metals). The competition between these two scales and the material deformation behavior in the presence of boundaries, interfaces, and free surfaces is far from being quantified or understood, yet is critical for understanding and exploiting the structural integrity of material constituents composing bulk structural materials and small-scale components and devices.

By using this knowledge, researchers will be able to define material design space in multiple dimensions and to learn how to create structural materials with vastly superior properties than can currently be achieved.