The most important thing Arati Prabhakar (MS ‘80, PhD ‘85) learned at Caltech was that she didn’t want to do what was expected of her. After becoming the first woman to earn a PhD in Applied Physics from Caltech, Dr. Prabhakar did anything but follow the traditional route for graduate students at the time. 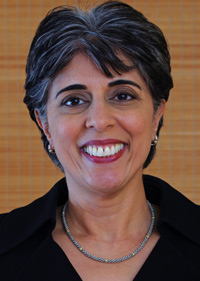 She first became a Congressional Fellow at the Office of Technology Assessment before serving as a Program Manager and Office Director at the Defense Advanced Research Projects Agency (DARPA) from 1986 to 1993. After serving President Clinton for several years as Director of the National Institute of Standards and Technology, she went to Silicon Valley, where, for the past 14 years, she has been funding and managing world-class engineers and scientists to create new technologies and businesses. In this interview, we find out more about this accomplished trailblazer.

ENGenious: What was your experience as the first woman to receive a PhD in Applied Physics at Caltech?

Prabhakar: I was an Indian immigrant kid who came from a family where my mom started sentences with, “When you get your PhD,” and it wasn’t a joke. It was sort of an expectation. But, at that time, the students at Caltech were pretty clueless about women. It certainly wasn’t thoughtfully hostile, though. On the other hand, it wasn’t particularly welcoming. People were just sort of confused. They didn’t quite know what to make of it. A couple of women had come through the Department and had decided to change fields. I remember a guy down the hall greeted me with, “I hope you make it.” But he said it with a sense of possibility. The progress that we’ve made over the last generation or two is pretty interesting. I have kids who are in middle school and starting high school this year. In the environment that they live in, girls talk about being engineers and no one gasps and thinks it’s remarkable. It’s changed pretty dramatically since my time. The broader involvement you have across society in our profession, the healthier it is for what engineers really care about, which is coming up with solutions that solve problems for our society.

ENGenious: How has your Caltech education influenced you?

Prabhakar: Well, Caltech for me was not a pleasant experience. Other alumni would say, “Oh, those were the best years of my life,” and I thought, the best years? I didn’t get a lot of jollies out of it. On the other hand, it was a very important experience. Initially, I was on the trajectory to get a PhD with the expectation that I would be an academic, but I rapidly realized that was not what I wanted to do. Today, new PhDs go off and do a huge range of interesting things, but when I graduated in ’84, you were expected to go into a tenure-track position at a university, IBM Research, Bell Labs, or some other serious laboratory. Those were the only choices, and none were what I wanted to do. My advisor, Professor Thomas McGill, was the kind that thought a PhD degree should be an enabler. He didn’t see it as a sin to leave research. Out of the blue, Tom said, “Why don’t you go be a Congressional Fellow?” Tom was someone who enabled you to do whatever you needed to do. That’s such an important person in your graduate career. When you’re young and right out of school, it’s a great time to just do something without plotting out the whole rest of your life.
Having a very solid technical foundation really helped with judgments I had to make in my career. My first major job after I left Caltech was at DARPA as a Program Manager. I was investing in people that I thought were going to make big leaps forward in technology. I wasn’t in the lab doing the work, but I was trying to exercise good judgment about where real breakthroughs might come from. That wouldn’t have been possible without the solid technical foundation I received at Caltech.

ENGenious: What have been some of the most satisfying times in your career thus far?

Prabhakar: When I left the conventional trajectory, a whole range of new options opened up to me. After about a year and a half of being a Congressional Fellow, I got the chance to become a Program Manager at DARPA. It was a dream job for me at that time in my life. I walked into the door and someone handed me 10 to 20 million dollars and requested that I find the highest-impact R&D in the area, the one that’s really going to make a difference in the world. It was wonderful. I had the privilege of building some programs over time at DARPA that I think have had a lot of impact in the long term. That’s one of the most satisfying things. I was at DARPA from ’86 to ’93, and in that period a lot of our investments were in new semiconductor technologies and, in particular, semiconductor process technology and lithography. In the late ’80s, 193-nm photolithography was sort of a pipe dream. No one had the right laser sources. No one had the right optical materials. It was pretty clear that we needed some kind of solution. X-ray lithography didn’t really seem like it was a very promising way to go to me, although there was a lot of money getting dumped into that. So, we planted some seeds in the late ’80s, and now the chips in your cell phone are made from the tools that use that technology.

ENGenious: What role can government play in new technology development and implementation?

Prabhakar: Well, for energy technology specifically, as in other areas like telecom, there is a critical role for government action. This action includes investments in R&D and setting policies and regulations that define boundaries on the market. However, we’re living in a dynamic environment. Geopolitics change. Energy supplies change. New technologies come online. How do you deal with all of those factors? We need to exercise judgment based on the dynamics of what’s happening right now. So, how do you do that? You nurture the ability to adapt and listen to what’s going on in the world and implement programs in a way that is going to achieve the right objective. I feel a great privilege in having worked in organizations such as DARPA and National Institute of Standards and Technology [NIST] that can do this. This doesn’t happen by accident. It happens by building organizations with people who are able to interact with the outside world—people who are given the autonomy to think and listen and then exercise judgment and who are held accountable for what comes out of that judgment. If you don’t have that, you don’t get the caliber of judgment that you really need to deal with these complex dynamic issues.

ENGenious:Where does the United States stand in resolving the global energy crisis?

Prabhakar: There is a huge amount of interest in moving to cleaner energy sources and addressing these issues, but you’re not going to get that enthusiasm in places where livelihoods and family income depend on coal. We just have to be realistic, and when you peel those layers back, it’s about different financial interests and fears. This has to be dealt with. The good news in the United States is that we do have a very strong technology foundation and the innovation engine to come up with new solutions. There are a host of very exciting new ideas that are bubbling and brewing, such as artificial photosynthesis and ways to store energy at scale.
As an engineer, the question in my mind is, What is it really going to take for any one of these to make a real impact on the way we create and use energy? We’re still, by far, the global leader in that area, but I don’t take that for granted. Unless that is continuously nurtured, it will shrivel up. If the markets don’t develop here over time, the technology advantage will wither away. Thus, not only do we have to fund the technology, we have to make sure that there’s some place for it to go in a domestic market to thrive over time. The change process that we are on is not going to take us from today’s energy system to tomorrow’s energy system, and then we’re done. This is going to be a continuing process of transformation. And that’s not something our energy system is very good at doing.

ENGenious: What advice would you give to the next generation of Caltech graduate students?

Prabhakar: Realize that there are so many things you can do with the foundation that you get at a place like Caltech. I really am grateful that I had the experience. Both the learning and the Caltech experience, which is very personal. When you live in an academic environment, there’s a tendency to think that what you see around you is all there is, but it’s not. It’s just one small piece of a much bigger world, and it’s a world in which you can take that foundation and do a lot of different, interesting, and impactful things.