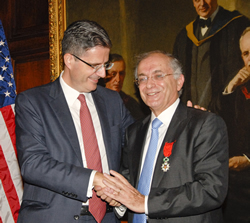 The Highest Decoration of the French Republic

Charles Elachi (Vice President and Director of the Jet Propulsion Laboratory and Professor of Electrical Engineering and Planetary Science) has been awarded the rank of Chevalier (Knight) and was formally inducted into the French Legion of Honor, known in its native land as the Ordre National de la Légion d’Honneur. Professor Elachi was received into the order, which is the highest decoration of the French Republic, by François Delattre, Ambassador of France to the United States. The appointment is traditionally restricted to natives of France, but it has been bestowed on foreign nationals “who have served France or the ideals it upholds.” At the award ceremony at the Athenaeum, Elachi noted that throughout his career, his links to France have continued through unique research opportunities. “Working together over the last three decades, JPL and the French Space Agency have revolutionized the field of oceanography,” remarked Elachi, “by developing the capability to observe and monitor ocean currents on a global basis from space.” 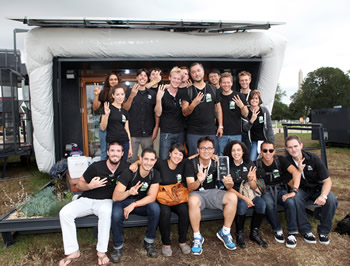 The high-tech house built by a joint team of students from Caltech and the Southern California Institute of Architecture (SCI-Arc), known as Compact Hyper-Insulated Prototype (CHIP), placed sixth at the 2011 U.S. Department of Energy Solar Decathlon. The Solar Decathlon challenges collegiate teams to design, build, and operate solar-powered houses that are cost-effective, energy-efficient, and attractive. The winner of the competition is the team that best blends affordability, consumer appeal, and design excellence with optimal energy production and maximum efficiency. The Caltech/SCI-Arc team tied for first place in the category of energy balance, placed second in the categories of engineering and home entertainment, and ranked third in affordability.

The Caltech/SCI-Arc team was supported by faculty and researchers across Caltech, including Richard Murray, the Thomas E. and Doris Everhart Professor of Control and Dynamical Systems and Bioengineering; Harry Atwater, Howard Hughes Professor and Professor of Applied Physics and Materials Science, and Director of the Resnick Sustainability Institute; and Neil Fromer of the Resnick Institute.

The Caltech Space Challenge was a Keck Institute for Space Studies (KISS) workshop proposed and led by Aerospace graduate students Prakhar Mehrotra and Jon Mihaly. It brought together two teams of students, assembled from participants from around the world, to develop plans for deep-space missions that could carry humans to an asteroid and back. Both Team Explorer and Team Voyager planned missions to an asteroid known as 1999 AO10, which is between 45 and 100 meters in length and is thought to have a relatively slow spin rate. Since little is known about this asteroid, both teams called for robotic precursor missions that could gather information needed to help plan the later human mission. The competing mission descriptions from the teams were so evenly matched that the jurors had to use three different judging methods to finally settle on a winner. In the end, the victory—and shiny new iPads—went to Team Voyager. 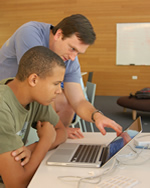 Building upon Caltech’s mission to benefit society through research integrated with education, Computing and Mathematical Sciences lecturers Michael Vanier and Donnie Pinkston partnered with the Caltech Center for Diversity and Apple, to work with 23 diverse and gifted high-school sophomores and juniors. The students came to Caltech as part of the Leadership Education and Development (LEAD) Summer Engineering Institute. The goal was to immerse the students early in their academic development to the innumerable career opportunities in engineering and computer science, empowering them to confidently make better-informed decisions when choosing a university and career. The students’ summer projects included a Sudoku solver, a “15-puzzle” sliding-tile game, and a Pong game. The games were a great hit at the final presentations, which were attended by Caltech faculty and staff, parents, and representatives from Apple. For more information, visit cms.caltech.edu/news/389.