Academic Leader, Educator, and Innovator with a Commitment to Time and Care 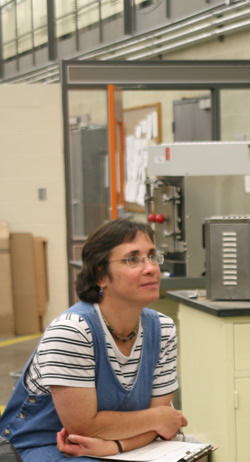 Janet Blume (PhD ’86) was the first woman to earn a PhD in applied mechanics at Caltech. She is the Associate Dean of the Faculty at Brown University, where she is also Associate Professor of Engineering. She has won several awards for her teaching and advising. A solid mechanician, she focuses on mathematical issues in the behavior of solids undergoing large deformations. One of her current research projects focuses on head trauma. Blume spoke candidly with ENGenious about her Caltech experience—how she learned to learn, to teach, and to pay it forward by following her professors’ commitment to a “time and care” approach to teaching. She describes her years at the Institute as ”game-changing.”

ENGenious: What inspired you to be an engineer?

Blume: As an undergraduate, I planned to major in physics or math in support of my original goal, veterinary school. But in my sophomore year, someone suggested I take an engineering course that focused on strength of materials. I totally loved it—how everything fit together. It appealed to me in a way that nothing else had before. I thought I could combine engineering and biology, but this was before bioengineering, and I had to declare a major. I remember asking the professor of my strength of materials course if I should do biology or engineering, and he said, “Oh, we definitely want you in engineering.” That remark, by a professor whose name I can’t even remember, stays with me to this day! By the end of my undergraduate experience, I knew what I wanted to do was pretty much what I’m doing now, and I applied to graduate school with an eye toward teaching. Now, I try to talk to students the same way: I want them to know we are interested in them.

ENGenious: What was your experience as Caltech’s first female graduate student in applied mechanics?

Blume: I’m surprised that it was the mid-1980s and there were still firsts like this for women. At the time, I didn’t think about it. On one hand, it was helpful to me. I think I had more attention from faculty because I was female. My thesis advisor, Eli Sternberg, Professor of Mechanics, was a feminist and very supportive. He did everything with the utmost care and devotion, or he didn’t do it at all. I’m honored to know I was first— and it’s nice to think I may have made it a little easier for other women to succeed here.

ENGenious: How did your Caltech experience influence you?

Blume: That first year was like no other. First, I was lucky enough to be here with a phenomenal group of students—great people I’m still in touch with to this day. And this is very important: We students took the teaching very seriously because Caltech faculty take great pride in teaching. I soon realized that everything I thought I knew, I really didn’t. I knew what an equation was and when I was supposed to use it, but at Caltech I learned where that equation came from organically; I could derive it ten different ways, and knew when to apply it and when I shouldn’t. I came to own the material, to internalize it in ways I had never done before.

ENGenious: Did your Caltech experience help you become a better educator?

Blume: Oh, yes. My time at Caltech was a game-changer in that respect: what I thought I knew, I realized I didn’t. Take fluid mechanics. As an undergraduate, whatever I learned left me as soon as the exam was over; it was gone. At Caltech, my professors made very complex stuff easy to grasp. I recently wrote to Wilfred (Bill) Iwan, Professor of Applied Mechanics. I took his dynamics and vibrations course, which I now use as a model for teaching. Professor Iwan didn’t just teach dynamics to me, he taught me how to teach dynamics. What I learned in graduate school is how to learn, and I was lucky enough to learn how to teach. I learned that even if you’re not teaching, you have to be able to communicate your work.
Professor Sternberg was a phenomenal advisor. I couldn’t have imagined a better experience. His advising and teaching, and the incredible care he took, along with other faculty, showed me how to work with a graduate student. I learned you really don’t gain anything by rushing through material. You put whatever time you need into teaching. When I started teaching, I decided: This was how I learned—and this is how I’m going to teach. It’s hard to start out as a faculty member—there are many competing pressures. When I started at Brown in 1986, I was told by a faculty member at Brown, “Don’t spend too much time on your teaching.” And I thought, “Don’t tell me that, because taking time is the way it works.” 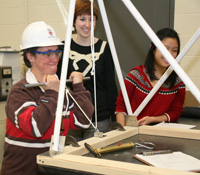 ENGenious: What are your thoughts on engineering education?

Blume: We know students learn best in a hands-on, interactive environment. We take a project-based approach, and give students calculation- based design experience early on. Lectures are a part of the process, but most of the real learning takes place outside the classroom, when they’re building their projects. If students get enough personal attention, everything falls into place. I think the experience of connection to a professor, to the departments, to engineering as a whole, encourages students to stay and graduate. The goals are to help them feel welcome and supported, and give them opportunities.

ENGenious: What about students who are great at teamwork and project work but fare less well on written tests?

Blume: I used to write somewhat clever tests. The problems required a strong test-taking ability. I would think, “Oh, these are clever questions,” and pat myself on the back. Students who were good test-takers would do fine, but I realized the tests were sinking others. Yet, these failing test-takers were made for engineering! They were very good at projects and organizing, always did the work on time, always attended office hours. It was heartbreaking—I wanted them to succeed! So I decided to stop being Miss Clever-Exam-Writer-Woman and rewrote the tests. The new versions included opportunities for both quantitative and qualitative input, and for partial credit.

ENGenious: Did rewriting the tests make a difference?

Blume: Yes, but it’s a delicate balance. We don’t want to push people through and set them up for failure later on. We work to gradually bring people up to the level necessary for a career—not to get all As, but to give them the personal attention and the tools they need to succeed. We try to recognize differences in learning styles and levels of understanding. Everybody gets to the same point so they can do the design projects, but more advanced students spend less time on the fundamentals. In the end, everyone has what they need to do the projects—and they do them together. We take care of everyone.

ENGenious: Everything you say has time and care in it.

Blume: As James K. (Jim) Knowles, William J. Keenan Jr. Professor of Applied Mechanics, said many years ago when I thanked him for all of the time he put into us students, “That’s why we’re here.”

Janet Blume is Associate Dean of the Faculty and Associate Professor of Engineering at Brown University.