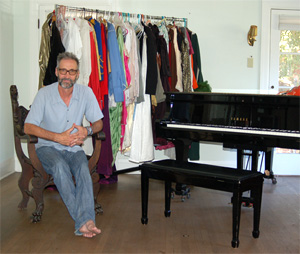 Brophy: Theater Arts Caltech (TACIT) originates in the 1897 activities by the Gnome Club to train students in debate, essay writing, declamation, extempore speaking, and—from an innate impulse to connect with people —entertain, educate, and share ideas and stir passionate discussion about science and culture. Starting in 1924, Pi Kappa Delta and the Caltech Drama Club presented an annual classical play, alternating between comedy and tragedy, curtailing their activities on the eve of World War II. During the war years and up until the early 1970s, club activity was sporadic. My predecessor, Shirley Marneus, was hired at that time, and for the next 35 years, musicals and Shakespeare became TACIT’s signature offerings. Over the last three years, with great student energy and commitment, the tradition has resurfaced, and this past summer’s Midsummer Night’s Dream is the latest offering. Although the program was created by and for student participants, we now include graduate students, postdoctoral fellows, Caltech faculty and staff, alumni, and the broader Caltech community, including Jet Propulsion Laboratory scientists and engineers. Students can earn credit for taking the class, but many do it because they just want to be in a show with other community members. It’s truly a community-based theater arts program.

ENGenious: Why is a Caltech theater arts program important? 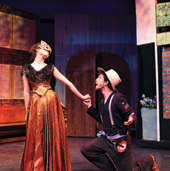 Brophy: First, for our students, it’s a kind of release from the intense pressure of total immersion in a theoretical world. Students can briefly step outside the abstract and engage in a very physical and psychophysical social experience—to create interpersonal connections outside the research lab. Many students feel a sense of isolation in their academic routine, and theater involvement offers them an instant and expanded social network. For example, we recently performed The Rover, the year’s main stage production. We had about 30 actors, at least 20 stage and technical crew, professional designers, and choreographers who participated— a group of about 50 people who are still communicating with each other today. Warren Brown, Caltech Professor of History, once described the arts as a pressure valve. Although I largely agree with that assessment, I think the moral imagination of scientists— really, the moral imagination of our culture—can come out of art, the discussion of art, and, of course, performance, a practical application of the imagination. Caltech theater also fulfills the vision of Noyes that cultural studies be a necessary component of science education. TACIT offers social interactivity, as well as skill of movement, of speech, of articulation, through the performance venue. Our students arrive with a kind of native intelligence—a very sophisticated way of approaching the world through abstract modalities. In TACIT, science merges with culture, and our performers end up engaging both sides of the brain. In the process, students gain self-confidence and develop the skills to be leaders.

ENGenious: What are your goals for TACIT?

Brophy: First, the timing of our shows has to be carefully orchestrated. My first play selection as director was Berthold Brecht’s classic Galileo. We had close to 800 audience members. It was a big production, about 30 actors. I noticed that as we got closer to opening, at least half the student actors were actually backstage during rehearsals, working on their midterms! The same thing happened with Karel Capek’s Rossum’s Universal Robots. It showed great commitment! And it wasn’t just bad timing (the fall), but students were spending 60 to 100 hours a term on the plays.

They’re not getting a theater arts degree, but many of them would qualify for a performance studies minor at another university. I think a basic performance class should be mandatory for all incoming students. Currently, I am working with International Student Programs (ISP) and the incoming international graduate students on performance exercises. I noticed an immediate increase in their “presence,” from eye contact and body expression to a greater ease of movement. The students ended in a happier mood, interacting more casually, seeming relaxed. My goal this year is to reduce the amount of time that students engage in the productions, but offer more opportunities for lesser time commitment—ideally six to eight hours a week for main stage shows.

I also want to focus on doing more musicals, more Shakespeare. This year, for example, we’re working on an off-Broadway musical comedy, Little Shop of Horrors. We want to create the coolest, biggest mechanical man-eating plant and relocate it to Southern California in this quirky, dark comedy. It has great music and it’s a little offbeat, and the students are excited about it.

Another goal is to help find, or create, a real performance venue on campus. We make do now with various lecture halls or outdoor venues, but I’d like to create an external performance laboratory here in the TACIT space, so we have a place to rehearse and perform. A dedicated space, or various small spaces, would benefit both TACIT and others across campus who put on performances. This November, we are presenting a new play on Bobby Fischer, Mate, at the Armory Center for the Arts; Tesla at the Pasadena Playhouse in April 2013; and Rashomon in Descanso Gardens and on the Beckman Mall in the spring.

I’m also here to complement the sciences, so another goal would be to interact with scientists and their research through performance, to provide them with additional tools for personal growth and development, but also help them to exteriorize their concepts in ways that will help the wider community gain an appreciation and understanding of their work. For example, when Professor Ares Rosakis helps us to understand plate tectonics and earthquake ruptures as a dance beneath the surface, it allows us different ways of understanding difficult concepts. This is where we all become, in a sense, cultural ambassadors for science. We’ve recently started an improvisation class, which supports this idea and how our students process their intense academic research and course work. We bring in professionals to work with the students, and at the end they do a 48-minute comedy set: improvisation, completely unscripted. We do it every term now.

Another way to encourage alternative voices is to offer playwriting opportunities. We want to develop new plays, so we do weekend readings. My MFA in creative writing for the performing arts helps me to facilitate conversations with playwrights who submit material to us—including members of the Caltech community! Yes, we can do Shakespeare, musicals, modernist fare, comedies. But we can also develop new plays about science and culture.

ENGenious: What brought you to Caltech?

Brophy: Returning from my Fulbright to India and wanting a different direction in my life, as well as Bob O’Rourke. India changed the way I think. I had taught for years, and performed in films and on television, including Star Trek: The Next Generation. When I heard about this job, I thought it would be a great fit. I think the Fulbright helped—I can adapt to different environments—and I’ve always had an interest in science and the history of science.

Brophy: I’d like our alumni to know that we have been creating a database of Caltech alumni who were involved in TACIT, going back to the early 1970s. We want to bring them back to campus to continue a new tradition we’ve started: throwing a party and letting them perform again—sing a song, do a monologue, whatever they’d like. People remember TACIT as student-friendly—a place to eat and relax. We’d like our alumni to come back, see what our students are doing now. Through performance studies, through experiencing the confluence of science and culture, they have found Caltech to be an even more exciting and interesting place to be.

Brian Brophy is Lecturer in Performing and Visual Arts and Director of Theater Arts at Caltech (TACIT).