A New Soliton Offers a Path Toward Compact Molecular Sensing

Scientists know that molecules in our exhaled breath can reveal a vast amount of medical information; for example, sensors to precisely measure minute changes in the concentrations of different vapors in breath may one day replace the standard blood test. However, no technology is yet available to access this data from exhaled breath in a timely, affordable way. A new process for generating self-reinforcing wave pulses, also known as solitons, may pave the way toward bringing optical molecular sensing out of the lab and into medical devices with a compact footprint.

Solitons are solitary waves that retain a consistent shape and velocity as they travel, without the usual flattening over time and distance observed in other waves. They are usually formed by the balance of linear effects (where output is proportional to input) and nonlinear effects (where output is not proportional) in a medium. Although solitons were first observed as water waves, they can also occur as sound or light waves.

Optical solitons may unlock a multitude of spectroscopic opportunities when used in laser sources. Spectroscopy relies on the fact that atoms and molecules absorb and emit light at different wavelengths. Scientists generate streams of tightly controlled pulses of light to measure these differences. Due to their robust nature as well as their potential for broad spectral coverage, solitons are ideally suited for use in spectroscopy.

However, the creation of optical solitons typically requires specialized optical hardware, which limits their potential to be integrated in widely used, portable devices like smartphones and smartwatches. Additionally, traditional optical solitons commonly have wavelengths that are shorter than the wavelengths where the wealth of molecular information is found.

Now, a team led by Caltech's Alireza Marandi has developed a method for generating solitons in these hard-to-produce, but diagnostically useful, long wavelengths. A paper detailing the work was published on January 31 in Nature Photonics.

Frequently, the production of optical solitons is rooted in a nonlinear phenomenon called the Kerr effect, which is a change in the refractive index of materials caused by the intensity of the input light. Solitons are formed when the Kerr effect counteracts the natural tendency of pulses to "flatten" as their shapes broaden while propagating.

In contrast, the method created by Marandi, an assistant professor of electrical engineering and applied physics, makes use of a different but stronger nonlinear phenomenon called quadratic nonlinearity, which allows for the generation of wavelengths that are double the wavelength of the input light.

"When you are operating at two different wavelengths, you have extra knobs to tune," says Marandi—the knobs being ways to manipulate optical pulses. Rather than relying on pulses at a single wavelength, Marandi's team utilizes different propagation speeds of different wavelengths. This leads to a process known as the temporal walk-off, in which two waves that were emitted at the same time start separating. As they start losing overlap with each other, they can give rise to modified pulse shapes.

"Typically, in nonlinear optics, researchers have sought to avoid or minimize walk-off," adds Arkadev Roy, an electrical engineering graduate student and lead author of the paper. "However, our work shows that there are opportunities in the other direction."

Substantial walk-off allows a short pulse to efficiently extract power from a long pulse. The result is a new soliton which can form at a wavelength twice that of the input wavelength.

“We are really excited about this work not just because of the beauty of the fundamentals,” says Marandi, “but also because the simultaneous down-conversion (wavelength doubling) and pulse compression is something we don’t know how to get otherwise in integrated photonics.” Like the miniaturization of computers and mobile phones in the past few decades, the research conducted by Marandi and team aims to transform the bulky optical sensing techniques currently used on large lab setups into small and efficient portable medical devices. 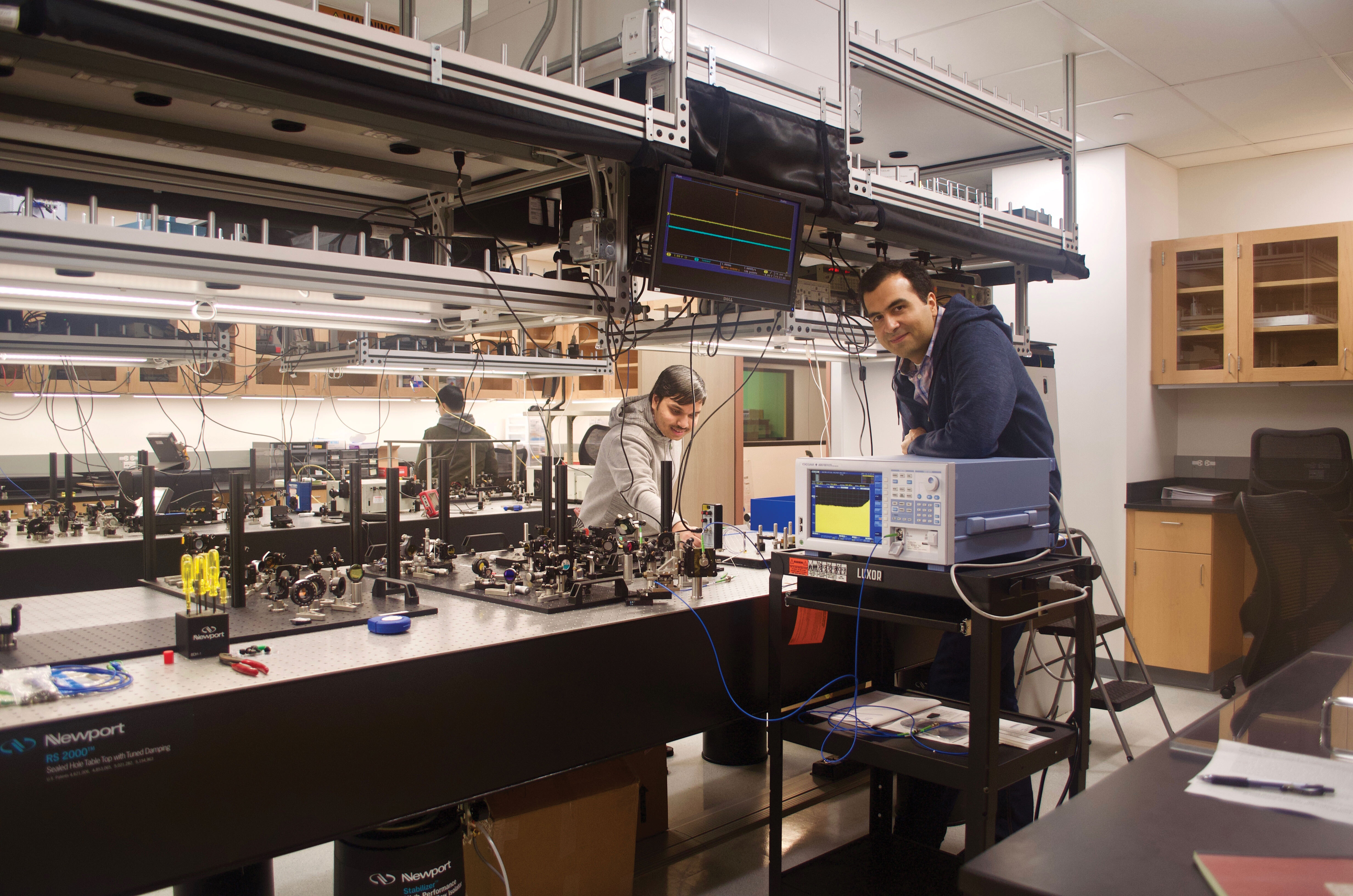